Pongola Game Reserve hugs the western shores of Lake Jozini, also known as Pongolapoort Dam. The closest towns are Pongola in the north and Mkuze in the south. The reserve was established in 1993, covering 31,000 hectares, of which, 9,000 is accessible for the elephant. A railway line bisects the reserve.

Between 1979 and 2001 over 800 elephants were reintroduced back to over 58 reserves in South Africa. Bringing elephants back to this area was a childhood dream of veterinarian, Dr Heinz Khors, one of the property owners within the Reserve. This dream finally came true after 7 long years of planning and collaboration with the rest of the Reserve’s owners, the Railway Company and surrounding communities.

17 elephants in two family groups were trans-located from Kruger National Park to Pongola in June/July 1997, and were known as the A&B Family Herd. Another 7 bulls were introduced. In addition Ingani, the resident bull, broke out of the reserve in March 2000 and brought back 5 orphan elephants from a nearby farm. They were between 12 and 18 years old.

This unique event inspired Heinz Kohrs and Digs Pascoe to bring to life the ‘Space for Elephants Foundation‘, a non-profit organisation which does exactly what the name says: opening up corridors for elephants as well as other wildlife to move through and extending their space. Passion, initiative, education, research and incorporation of the surrounding communities are key factors that make up this Foundation.

The orphan elephants were introduced by Ingani to the A&B Herd, but not all were accepted into the herd. The four orphan females stayed together as a separate bond group, thereafter know as the C-Family or Orphan Herd, the orphan male, Tusker remained with the A&B Family Herd.

2017 marks the 20th anniversary of the re-introduction of elephant into the Pongola Game Reserve area. 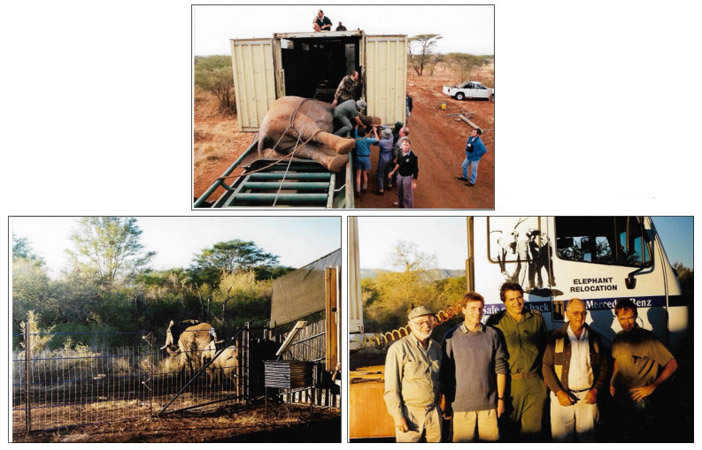 At the foot of the majestic Lebombo Mountains and the shimmering waters of Lake Jozini, you will find a special destination called White Elephant. It is a place with magic and soul inspired by a dream and created with passion. White Elephant Safari Lodge captures the history and romance of a bygone era.