It’s our third visit to uMkhuze and over the years the roads have greatly improved. Sadly the accommodation has deteriorated quite badly. The zip on our flysheet is broken completely and the main zip on the outside of the tent fails to reach the floor. The kitchen cupboards are showing significant signs of neglect. That said, we are determined to make the best of it.

We leave our tents just after sunrise and head for Nsumo pan for breakfast. We are in the ‘golden hour’ and  hoping for some good animal sightings in this beautiful early light. We would even settle for impala but no creatures oblige! 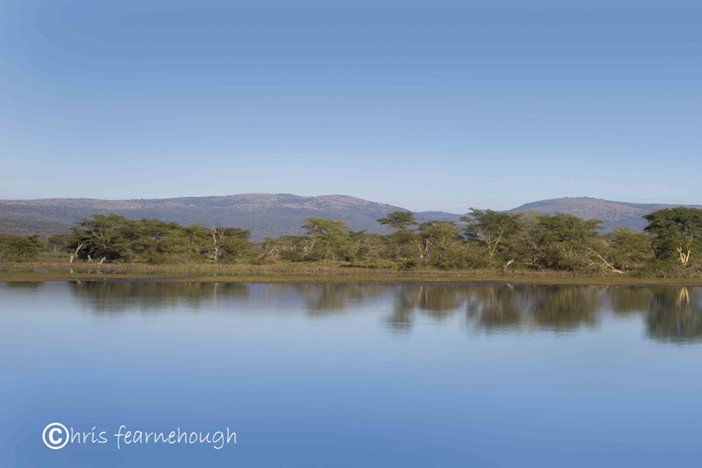 The serenity and tranquility of the pan is the perfect place to enjoy our fresh coffee and rusks as we just soak up the unspoilt view.

Eventually we hit the road again and although we have been out for a couple of hours, we still haven’t seen any other cars…or animals for that matter!

Suddenly, there in the distance is an unmistakeable silhouette. Mickey mouse ears and tall, skinny legs – Lycaon pictus – the African wild dog. 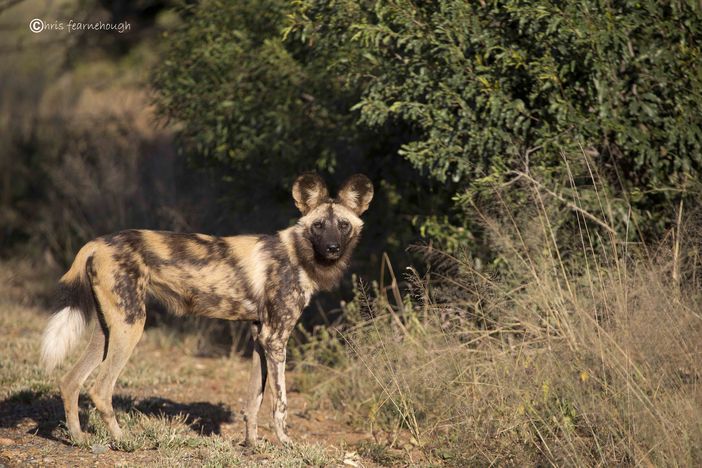 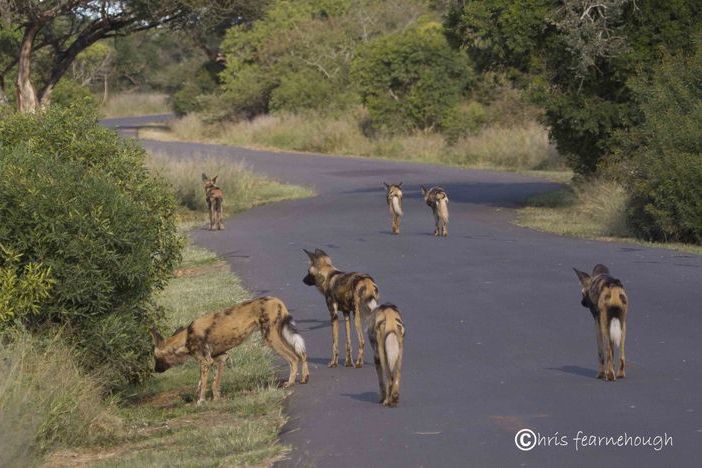 Dogs are emerging from the bushes while a few are sitting by the side of the road. We count seven in total and two of them are collared. I switch off the engine and we watch to see what happens. Some dogs are quite nonchalant about us being there while others come to investigate. After a short while they all disappear into the bush. We note the location and decide to return later in the afternoon when they go out to hunt. 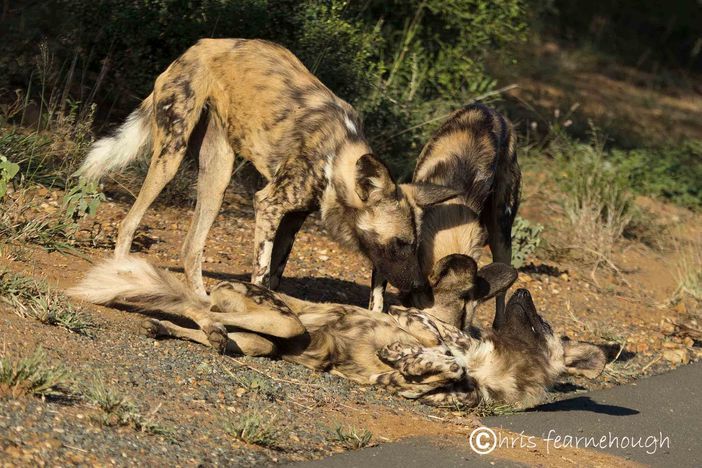 We return about 3pm and find the dogs resting about 50 metres into the dense bush. We sit and wait. It could be a long wait as it is still quite early. Then at about 3:15 a couple of the dogs become more alert and get excited. They start walking around and touching other dogs before moving off crouched low to the ground. Within moments, all the dogs are on the move. We decide to follow them and drive very slowly along the road parallel to the pack. Eventually they emerge onto the tarmac in front of us. We stay a discreet distance behind them but occasionally they stop and we catch them up. It is interesting to watch their interaction with each other. We get to see the playful, submissive and inquisitive nature of these dogs. They afford us the luxury of their company for about 30 minutes before melting back into the bush. 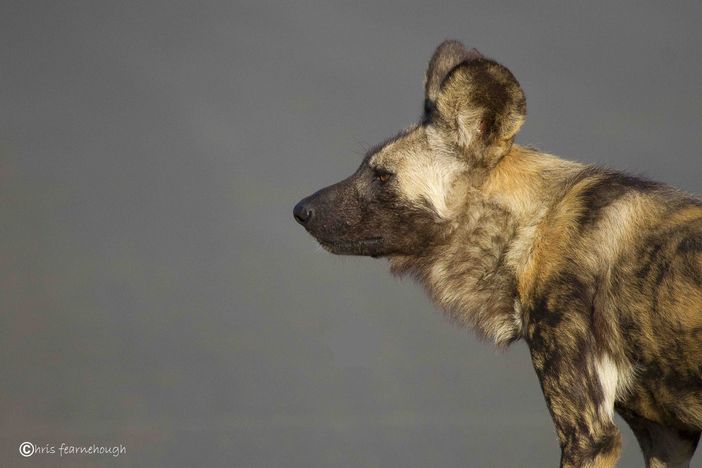 This is the last we see of them but it’s been a great day with our favourite predators and we have had them all to ourselves and not another car to be seen!

We subsequently learn that this is a new pack named WD7 and we were the first people to see them since their release. Two males had been brought in from another game reserve to improve the genetic pool and they had quickly bonded with the existing females.

We return to camp to light the braai and open the wine. As darkness falls, we are approached by four bush babies making pincer movements towards our kitchen. Later we are joined by a genet; perhaps the politest animal we have ever met. It just sits there and looks at us. Clearly in the past, people have fed it but it will leave hungry tonight from our tent. 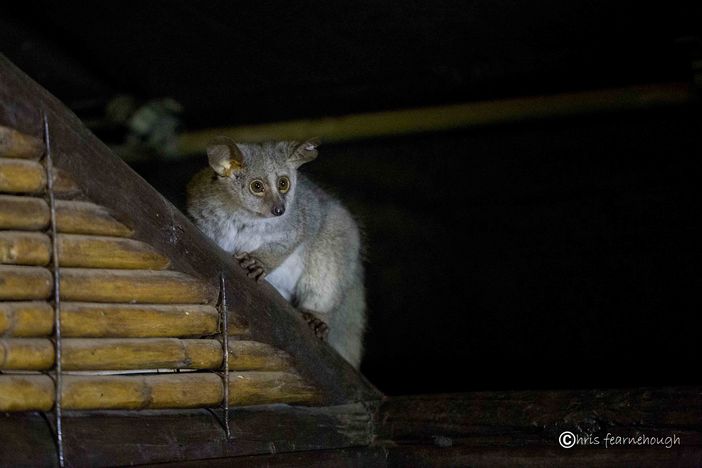 Time for bed and the outer zip on our tent has now broken completely so we are effectively sleeping with the tent open. Not for the faint of heart!  We pile some chairs and a table up to create a makeshift barrier.
Perhaps, tonight, for the first time ever, we will not be hoping to hear the lions roar! 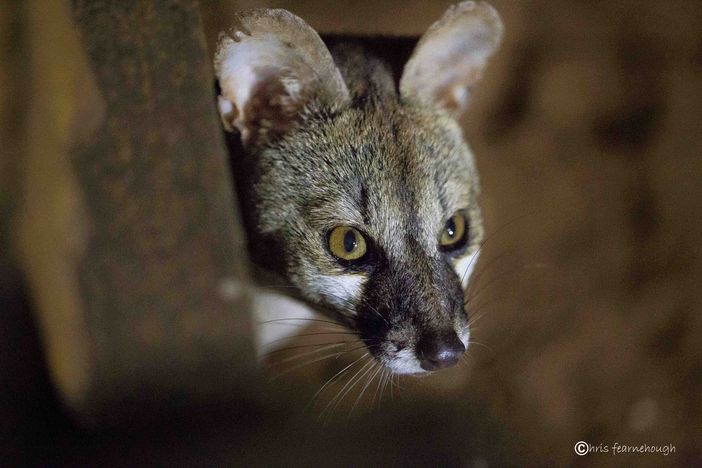