You are at:Home»Bush»Ndaka Safari Lodge 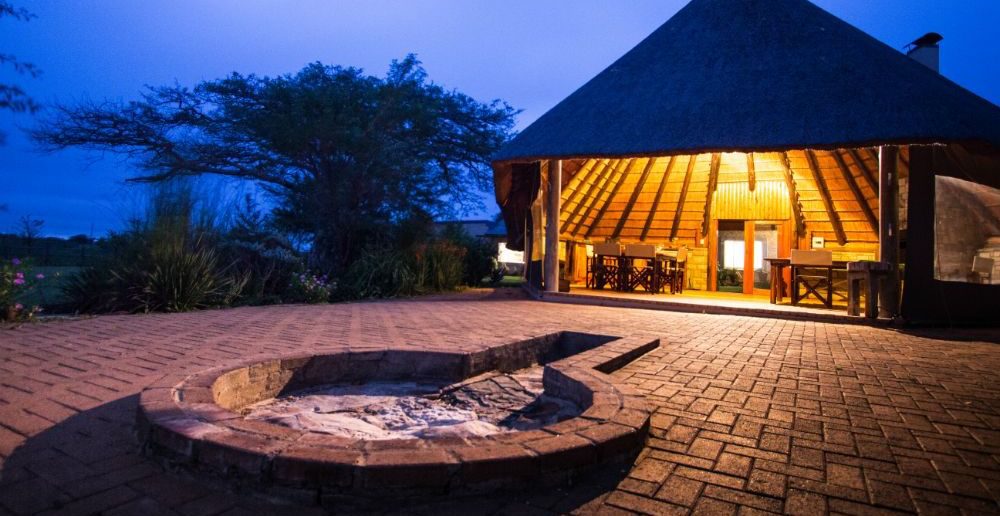 An animated brown coloured warthog, tail held high, forms the logo for our next destination.  The word Ndaka in the Zulu Language means mud. And no animal is happier than a warthog when wallowing in the stuff. I was just hoping that we would not be seeing too much mud on this leg of our safari. I, unlike Pumba from the ‘Lion King’ was not to partial wallowing.

Ndaka Safari Lodge has recently been purchased by new owners and is undergoing a transformation. The main lodge, an original farm homestead, is where guests have always stayed. New safari tents are now under construction and we were lucky enough to be able to stay in one of first brand new ones. Eventually the new owners will move into the main lodge and live on site. Behind the twelve new tents which are well under construction, and where all guests will stay, a brand new lodge will be constructed. Our tent was huge with open plan bedroom and lounge. The en-suit was equipped with twin wash basins, free standing bath tub, indoor and outdoor shower. Our bed looked out through sliding patio doors directly into open grassland where the big five roam freely. Photographic artwork from head ranger Brett Hoy adorned the tents walls adding splashes of colour.

On our drive into the reserve we had seen dozens of vultures perched in thorn trees and on telephone poles. As we sat in our tent looking out across the bush we heard the noise of a huge bird approaching. From behind the tent a vulture appeared only feet above us. The whoosh of air being dispersed by its wings seemed to echo over head. In all, six vultures flew over us one after the other and disappeared behind a distant hill.  What was attracting the attention of so many birds? Or, was it the case that a lack of thermals after a few cool overcast days, were keeping the birds close to the ground?

Our ranger for our stay was Dean and he would be looking after us and Elise & Daniel from Norway. The Norwegians were on their honeymoon and their first visit to South Africa. Daniel and Dean soon pointed out why we were seeing so many vultures. Only a short drive from Ndaka a huge black maned lion had killed a wildebeest. Elise showed us the pictures on her camera of this magnificent lion about to feast on his prey. The kill was on a dirt road surrounded by open savannah so the morning guests had been treated to a gruesome yet wonderful sighting.

The reserve was teeming with bird life. As we drove across huge open grassland hundreds of swallows and falcons were feeding on flying ants. Rain had triggered the ants into leaving their nesting sites and the birds were taking full advantage. Swarms of the ants were in the air forming clouds that the falcons, in particular, swooped in and harvested ten of thousands of the helpless insects. With me being a ‘bad bird watcher’ I loved the spectacle of silhouetted birds of prey feasting against the departing storm clouds. The scene was lit perfectly by the last of the days sunlight breaking through the broken clouds.

Falcons were resting on fence posts between meals probably to ease their digestion. I was amazed that on one post we came across a perched francolin. This is a bird normally associated with scurrying around the roads and vanishing at speed into low growing bush. By a water hole we sat and watched a pied kingfisher fishing. The black and white bird was over shadowed when a malachite kingfisher made an appearance in the reeds showing off his red, blue and orange colouration.

Dean was keen to point out the smaller reserve residents. We stopped at a collapsed homestead and observed the fattest golden orb spider that I have ever seen. “In Mexico orb spiders are farmed for their web, which due to its immense strength, is used in the stitching of bullet proof vests” Dean explained. He also managed to avoid a Shongololo, millipede, crossing a dirt road. In the act of moving the insect to safety Dean pointed out that although the Latin name millipede implies a thousand legs, the Shongolo has only around seven hundred.

Amongst the herds of plains game we got to see eland, giraffe and gemsbok. Dean explained the gemsboks in built technique of thermo regulating and keeping cool on the hottest of days. “Under the black snout is the croted rete, a maize of blood vessels that cool blood running to the animals brain that ensure there is no over heating”. We passed breeding herds of buffalo and elephant, both numbering around thirty, with a mixture of old and young members. We even got a brief sighting of a cheetah that was stalking impala. As for the lion, there was no sign of him or the kill. We were lucky enough to spot two lionesses close to where the wildebeest had been taken down. We suspected the pride had moved the carcass to their new position to feed on undisturbed.